Here's what the tigers like best. Bully over the defenseless. But not innocent. Joysticks are there to tire them pinch, bend. to twist and slap them about the floor. Brought up on the reading of "Flute z Mandrakes "we decided to have fun in Robert. Joysticks are nice. They are produced by the Chinese, and they like aesthetics. The housings are carefully finished, flexible cables, plugs smooth, buttons do not jam. About We had no reservations about the external appearance. The time of testing has come. First, the F-29 Reta // 'an Amiga engineer and a flight to the skies Shadow of well, every competitor! later the Beast / I and wandering through the unknown world. With Carrier Command we checked the precision of ra and Print Fox in graphics mode on so, The Commodore 64 allowed to test the precision of Auto-Fire. Child test + joystick + Double Dragon / I was not already needed, but allowed eliminating the weakest. Then, dry, we tested the strength suction to the table and to the vertical glass and the length of the cables. We tested the switching on the amstral clone iBM some joysticks in Amstrad mode. Pegasus found a screwdriver in the cupboard, so the devil entered us again. We opened it every boy. Some had w inside weird stuff. Generally lunges in the eyes precision of workmanship and application new generation micro switches, almost indestructible. Unfortunately, several prisoners died during the torture. Some just couldn't stand it, others have lost their screws.

Fortunately acted as a shaman and changed two boxes full of "make." it alone "for inch and non-disabled joysticks. In the construction of Quickjoy's engineers, there is a cool sense of purpose. Caused she differentiates joysticks for an angle their destination. On the one hand, there are handles intended for small hands of children and for the hands of their larger colleagues. In turn, you can see several joysticks designed specifically for flight simulators. which they confirm also their names. Another general division is the complexity of the structure. Here they throw simple joysticks against the background of a few huge tanks. equipped with clocks and stacks of switches. There is no doubt that all the goodies in the heat of battle decrease and come out real nature of the joystick. It does not mean that additional haberdashery is unnecessary, because often performs very important functions. For example, completely new and very a functional idea is a switch Slow Motion. It allows you to slow down joystick reaction to movement, which increases the control precision.
______________________________________________
SV-119 Ouiokjoy Junior: This delicacy creaks very much and is resistant to action. does not allow for a precise sense of the moment of operation, Fire buttons do not work great, and with strong pressure the screws begin to release. Our copy blocked a bit and it died there first. I especially disliked the short handle. who was completely lost to W. soaked with blood, from a hand smacked into a fist. The suction cups are nice; Ouíckioy Junior stayed on the glass 10 minutes.
---------------------------------
SV-120 Quickjoy Junior-Stick:

This model is designed to be held in the hand, which makes playing for longer periods of time get uncomfortable. Not to mention the fact that to His service requires a colossal strength. it's not the best contacts lock up and figure on the screen goes crazy. The joystick is also having trouble with spontaneous return to the zero position. Individuals they will not be happy either, but the Fíre button is very comfortable and does not cause thumb fatigue. In our copy, the stick broke after a few days.
---------------------------------
SV-122 Quickjoy II: 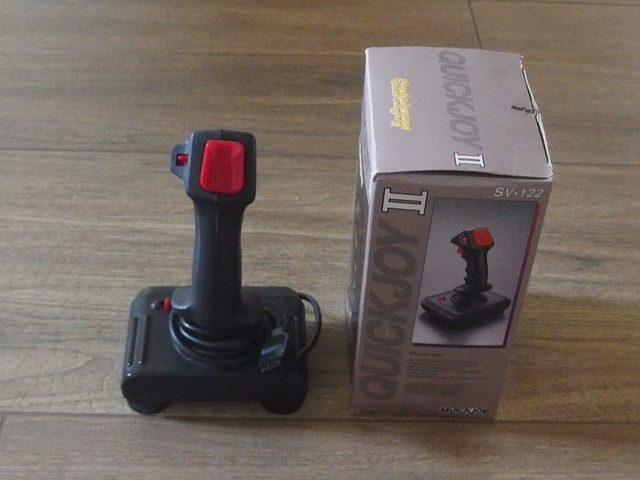 This construction is more solid, but still resistant and requiring precision of movement. The joystick comes in quite a bit. right Repeatable Auto ﬁ re system and switch to CPC standard. There is also resistance to big swings but pressing the top fire causes the stick to move involuntarily up. It stayed on the glass for 10 minutes. the suction cups are durable.
----------------------------------
SV-123 supercharger Quickjoy III:

Its line resembles a Porsche, it is also just as cool and precise. Hard to reach Auto ﬁ re fires uneven bursts, top Fire is very inconvenient. The stick seems to be shaky, but the microswitches exclude accidental operation. Holding the joystick with the left hand on the table, it pinches the area of the thumb when moving the stick towards itself. Suction cups they slide a little on the table. The joystick stayed on the glass for almost 12 minutes.
----------------------------------
SV-124 Quickioy II Turbo: The design is similar to the Ouickjoy II but instead of the metal sheets it uses switches. This allowed for an increase precision of operation. while the top Fire buttons they have become sensitive and accurate. Easily accessible Auto ﬁre runs in short. in intermittent bursts. You can feel the resistance on the bar against accidental operation. The joystick is precise and responsive. Nice suction cups kept him on the glass for over 10 minutes.
-----------------------------------
SV-125 Quickjoy V Superboard:

Here is a powerful and functional design. Equipped with a clock with a buzzer. three Aulofire frequencies and varied Fire buttons. Both left-handed and right-handed people can use it without any problems. A special switch is used to select the active Fire button - top or bottom. Accurate and extremely resistant joystick players. The suckers hold on very good - 15 minutes on the glass.
------------------------------------
SV-126 Quickjoy VI Jet-Fighter: A modern solution with a characteristic multifunctional "head" on the top of the bar. The joystick is thoughtful. but reacts very quickly. The suckers are not posted on . because at large tilts the housing overwhelms holding the finger of the left hand. Suction cups slide on the table. and the glass remained 4.5 minutes.
-------------------------------------
SV-127 Quickioy VII Top Star:

The modern shape and aesthetic workmanship guarantee the success of Top Star. The handle is very comfortable, soft and placed on a double joint, and the inner body hangs on springs forming the absorbing system shocks. There are no solder connections inside, which allows easy replacement of microswitches. This joystick is equipped it also comes with sturdy suction cups. Slow Motion switch and very comfortable Fire buttons. We do not recommend it only for muscular strength games, as it is not, unfortunately indestructible. It hung on the glass for 18 minutes.
-------------------------------------
SV-128 Quickjoy VIII Megaboard: 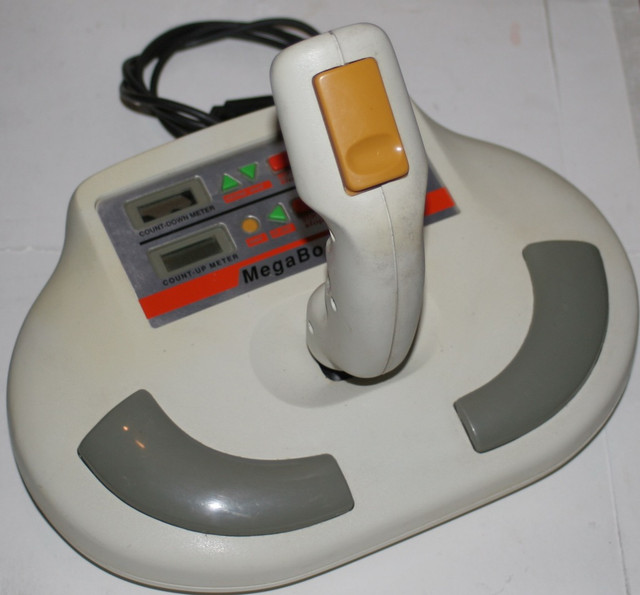 It occupies half the table, but it is not replaced during long air expeditions. It is equipped with two timers - a clock and a countdown counter down, three Auto ﬁ re positions. switch Slow Motion and switch to CPC mode. There is he is extremely sensitive and precise. but not delicate. The stroke of the stick is large and the stick itself is comfortable. In addition to the two standard Fire buttons, there are large ones on the housing. Fire bends, In which you can put a good punch. There is a lot of electronics inside and durable micro switches. The suction cups are good
-------------------------------------
SV-130 quickjoy IR infrared:

It is an exclusive but slightly chimerical joystick. The receiver part is placed next to the computer. and the right one the joystick is held in the hand or leaned against table. Communication is via infrared radiation; coverage is very big. The handle resembles a pistol and it is very convenient. Unfortunately, the trigger styled Fire takes a long time fingers, while in a normal hand, pressing fire causes the joystick to bend involuntarily. Auto ﬁre is well available and functional. We strongly advise against this joystick for thugs, because tick is extraordinary glue tender and delicate. The precision of the infrared operation exceeds any known joystick! However, it is very easy to damage. so we recommend it for graphics programs and games that are not more lively than chess.
-------------------------------------
SV-140 Quickioy Enterprice:

It is a classic design for flight simulators and indeed, it allows you to feel the machine and maneuver freely. It has the longest cable! It is generally not suitable for games other than simulators. Our copy had trouble making contact when it was bent downwards. You need both hands to control it, so it's hard to reach for the keyboard or at least for AutoFre floating frequency regulator. Fire buttons are small and hard available, while the handles are thin, so uncomfortable for long fingers. Suction cups has a nice - 10 minutes on the glass. but after table slipping indecently.
-------------------------------------
SV-201 Quickjoy M 5: It is the same design as the SV- 126 Jet-Hghter, but with an AutoFire frequency control and knobs X-Y centering. It is necessary. because it is is a joystick specifically designed for IBM. It is equipped with a standard one a plug that fits the Game Port socket Multi l / O cards. Unlike common IBM joysticks, the M 5 does not is analog! It makes the game so much easier. but it worsens the comfort of working with, for example, the PaintBrush graphics program. Quickjoy joysticks are a very interesting proposition for fans of computer games. The initiative of TAL, a joystick distributor, was very much needed dried Polish market. The players have a wide range of. The rest is up to them.
Top
Post Reply
1 post • Page 1 of 1