This is how you found yourself, dear Player, in strange conditions. You must survive on an unknown planet and you have everything against you: fauna, flora, weather conditions. This is the meaning of the new Silmarils game titled Robinson's Requiem. As already mentioned, your goal in the game is to survive. It won't be easy. Moving around the planet, you will encounter not only animals, but also hostile natives. You need to pay urgent on your health because you know if they are lurking in the air deadly bacteria. It is good too control your position on the map the area. Besides, you have nothing that could help you in your struggles. You need weapons and food yet to find. And win! Your first task should be to find the shipwreck and then the first aid kit containing all the necessary medicaments. The second aspect is the high level graphics (3D, 256 colors). A vector crossing is used here shaded with scaled bitmap graphics. Another thing is that it is the highest the level of detail of the image will not be for everyone available. On PC 386 or on Amiga 500/600 (2MB RAM) it can of course be obtained, but the program will run a bit (of course, the PC version will be faster than the A500 / 600 version). Fortunately, you can set the size game screen and image detail level on the minimum and then the game will run OK (not to mention the Amiga 500/600, a 32-color version was prepared). recommended hardware is PC 486DX / 33 or A1200 with HD and extension memory (note, failing extensions In Al200, the game should be "run" from Shell or use the floppy version, because it may end up damaging the HD). Now let's move on to the plot. Thread despite the innovative idea - despite the fact that playing does not cause ecstasy In fact, nothing is happening There is clearly a lack of how I play it RPG type should be, subsequent adventures in general his So you stumble upon the stranger So much for the game itself. The choice of whether to try your hand or not is up to you. I would only like one thing say - this game is definitely worth it although to see. 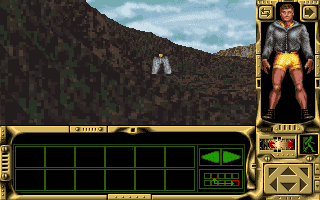