Card games don't usually sin quality of workmanship, especially under in terms of graphics and sound. Of course, there is a lot of so-called "strip poker" where only taken care of for graphics (although in most cases it was not done satisfactorily anyway). The REKO Productions company went a step further, releasing a computer adaptation of the solitaire with interesting graphics and good sound, and in addition only in the HD installation version. 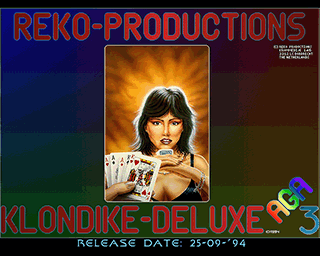 REKO is amazing in another way, it is game intended only for Amiga 1200 / 4000, i.e. machines with AGA, and in addition there is SHAREWARE! At the outset, I make a reservation that the Klondike 2 really requires a computer nice hardware configuration. Has to so it must be at least an Amiga 1200, of course with a hard drive. Screen game is in high resolution mode which is 640x512, so applied interlace. Unfortunately, the Klondike 2 Deluxe could show up in the Whole its beauty, it is even indispensable multisynchronous monitor which allows showing the highest non-interlaced resolution. I'm not going to feel sorry for playability of solitaire. It has gained enormous popularity over the centuries precisely that it can be played by basically anyone (if that person knows the rules of the game, of course). Execution is what it is for Klondike 2 is sure to attract The degree of expansion of the game is not maybe the highest, but what can be expect solitaire and that in addition shareware? As sure to additional options may be selected and own creation of can play. 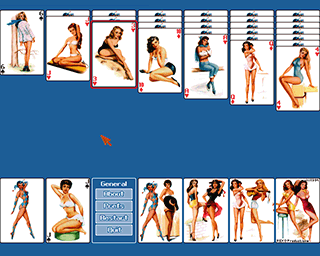 To pro There are three decs attached to the gram: one with young ladies (dressed), the second - traditional, the third - fantastic-comic (you can admire them in the pictures below), and for some time now more and more cards have been circulating, be it by REKO, or else production of other amateurs of solitaire. The authors of the game attach a text file explaining the rules in detail solitaire games and, step by step, how to create your own card graphics (it's really nice creates his own decks, and this work provides a lot of satisfaction - although the fact is, you need to have some knowledge in using painting programs, without which you don't move). All carded scammers can try their hand at Higher levels of difficulty but then the arrangement of the passion is bordered To wrap up this short review, Klondike 2 - Deluxe is very much an interesting proposition for those who have the appropriate equipment and (especially everyone!) are interested in games cards. It is also kind of an exception, as I have not met so far (Wolfenstein have nice graphics. but I don't grass them) of such a polished Shareware game. Bravo REKO, We are waiting for your next products.
I have no name and never will have.
Top
Post Reply
1 post • Page 1 of 1